These pineapple spears are coated in a buttery brown sugar apple cinnamon glaze that caramelizes on the grill! It also pairs perfectly with a citrus carne asada!

According to Wikipedia Carne asada is a roasted beef dish, literally meaning “roasted meat”[1][2]. The dish mainly consists of pieces or thin cuts of beef (e.g. flank steak, skirt steak), sometimes marinated, sometimes lightly salted or rubbed with salt, pepper and/or spices, and then grilled. It can be eaten alone, with side dishes, chopped and eaten as tacos, or chopped and used as filler for tortas, burritos, etc. It is commonly accompanied with guacamole, salsa, beans, and grilled scallions and tortillas.

The dish is commonly prepared in the northern parts of Mexico (in the states of Baja California, Baja California Sur, Coahuila, Sonora, Sinaloa, Chihuahua, Nuevo León, and Tamaulipas) as well as in the American Southwest (especially Texas and New Mexico). It can be found as the main ingredient in tacos, tortas, burritos and fajitas, or is simply served as a stand-alone. It is sold at Mexican meat markets called “carnicerias” in the American Southwest; especially those states with Mexican/Mexican-American enclaves.
When purchasing carne asada from meat markets, consumers have two options available to them regarding the amount of preparation the steak has undergone pre-purchase: preparada, marinated meat as described above, serving as a time-saver for the home cook but typically at higher cost; and no preparada, unprepared meat, allowing for a home cook to create one’s own marinade. I buy unprepared meat and doctor my own.
All my pictures are before as we’re having it for dinner tonight. I’ll add an after picture later. 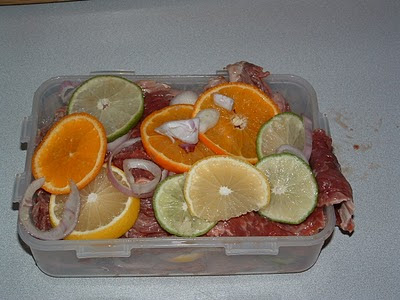 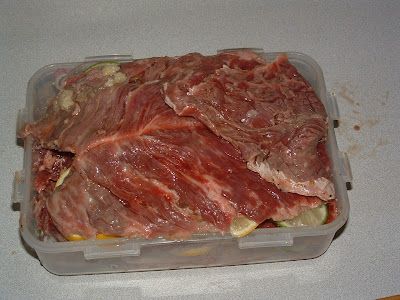