I found this recipe for Buffalo Chicken Pull-Apart Bread on Facebook, you know one of those that they show you in video form in 30 seconds or less AND looks really scrumptious?  I was thinking of making it as an appetizer when our son and family are here at Christmas time, but needed to test it first. 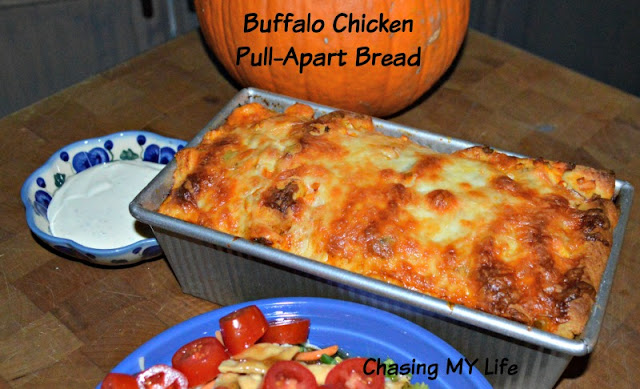 Well, this recipe did not disappoint.  I made some of my homemade Farmhouse Buttermilk Dressing to go with it and the combination was addicting! Instead of an appetizer we added a salad and made it a meal.

BUFFALO CHICKEN PULL-APART BREAD
2 packages Pillsbury pizza dough (I used 1 recipe of my homemade pizza dough)
2 cups chicken, cooked and shredded (I used original recipe Costco Rotisserie chicken)
1 cup Buffalo sauce (I used Frank's Original Hot Sauce)
1/4 cup scallions, chopped (I used more, about double - we like onions)
2 1/2 cups grated pepper jack cheese (I used regular jack cheese)
1/2 cup unsalted butter, melted
1 jalapeno, sliced (OPTIONAL - I didn't use)
Ranch dressing for dipping (I used a batch of Farmhouse Buttermilk Dressing)
NOTE:  The original recipe had you doing each square one at a time, but I found it much easier to do them all at once and then stack for a more even and less messy build.
Posted by threesidesofcrazy at 11/18/2016 07:21:00 PM