When we decided to come here and take on this project it was supposed to be some paint, a little remodel and updating and A LOT of sweat labor for a couple months. We were told the carpet was salvageable and the appliances worked. NONE of which was actually true.  Unfortunately it took us almost 10 weeks of cleaning out the trash and donations to even be able to properly assess the situation.

Had we been told the REAL story with the condition of this house we would NEVER have come here!  Now, we just can't wait to be done!!  Day 253 and we just pray we will be done by day 365 with this nightmare.

This week is about FINALLY bringing the laundry area into the 21st century and up to code. When we arrived the laundry area contained my grandmother's OLD washing machine, an almost as old dryer that was not vented to the outside despite an opening cut through the wall, and a fairly new water heater that had been installed NOT UP TO CODE on top of the original base that was now rotting through and home to all sorts of critters.  First of all I'm quite appalled that SEARS would install something so poorly and wary of ever using them in the future. 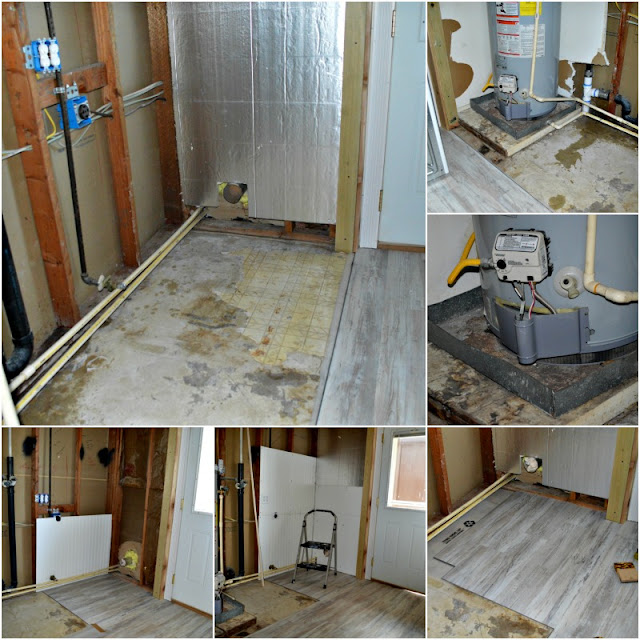 Above is the before pictures AFTER we cleaned out all the crap short of the actual base and wall behind it. We were able to get the actual floor for the water closet portion laid down and the insulation for the outside wall and the inside closet walls. 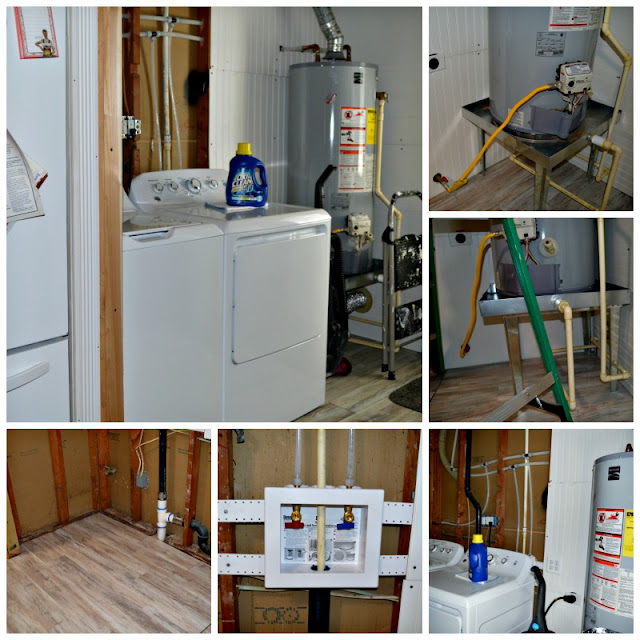 Above is AFTER our "normally"wonderful plumbers were here, but before we installed the interior walls, ceiling, light and the cabinet above the washer and dryer. I did get the cabinet stained to match the kitchen cabinets over the weekend. We did get the remaining floor laid after they left for the day.

I say "normally" wonderful plumbers because Henry, the estimator was here two weeks ago and we planned this whole project out and booked for the 1st of July.  Then after being rescheduled two separate times due to their workload I expected perfection. Unfortunately perfection was not their forte' today.  They did not have ALL the parts they needed to accomplish this project according to the original plan so in our opinion they half-assed it and "changed" our original plans for us and we will now be going to Lowe's or Home Depot tomorrow to purchase the parts needed to change the things they did not do properly to get OUR plan back on track:
On Friday we will be putting the washer and dryer on "SLIDERS" also and starting to work on the walls, ceiling, cabinet, new LED light and the actual water closet door and broom closet.
Posted by threesidesofcrazy at 7/06/2016 07:53:00 PM