This month challenge (since this is the month of Valentine's Day and love) is to make a Hungarian pastry called Rigo Jancsi.  A popular Austria-Hungary dessert is named after Rigó Jancsi (1858–1927), a famous Hungarian Gypsy violinist who seduced and married Clara Ward, Princess de Caraman-Chimay, the only daughter of American millionaire E. B. Ward and the wife of Belgian Prince de Caraman-Chimay. Their love story never ended happily ever after though. This is actually a chocolate sponge cake filled with chocolate mousse, and topped with chocolate ganache.  I added some fresh raspberries and and a raspberry coulee. 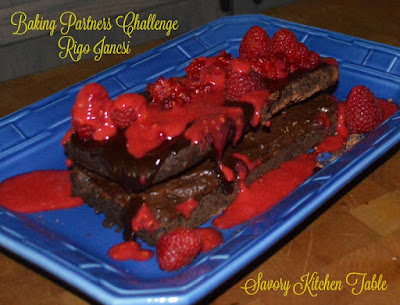 This really is a time taking effort, you need at a least a day to make it but it worth all effort. This recipe is adapted from Joe pastry and stabilized chocolate mousse inspired  from here. This recipe makes about six 2 ½ inch pieces.