I woke up feeling a bit more optimistic, even a little excited about how well things have been going. 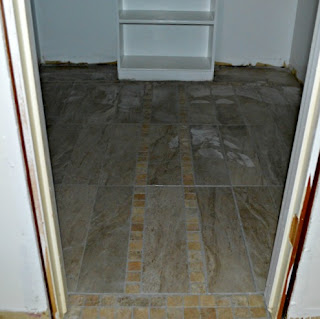 I was able to get the first layer of grout down fairly easily on the master bedroom closet floor.  The carpet installer came and measured the bedroom and said we might even be able to have carpet by next week! I also got my desk chair put together - it's been in the box for 5 years! I also got 5 loads of laundry done, folded and put away.  I was able to put together a "rag" tote for hubby in the garage and today was trash day so spent some time hauling things out for our awesome trash guys.  They would take it all anyway, but with the beer/soda incentive they do it with smiles on their faces. 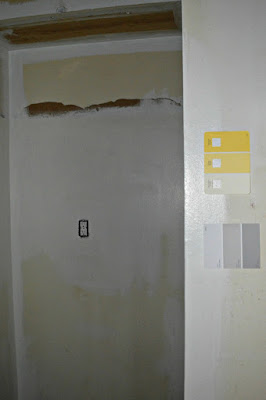 We were able to narrow down the paint color choice - FINALLY! We started with BEHR "Bakery Box", but hated it after it was on the walls - too institutional.  Good thing each rooms needs at least 2 coats and 3 in some areas LOL.  Next we chose SHERWIN WILLIAMS "Greek Villa" but found it too plain despite what we saw in the store so it has now become the "primer" for the master bedroom and kitchen.  We finally decided on OLYMPIC "Arctic Cotton". It will not only match the gray tone carpet, but also the whitewashed birch tone tile for the farmhouse kitchen and bathrooms. 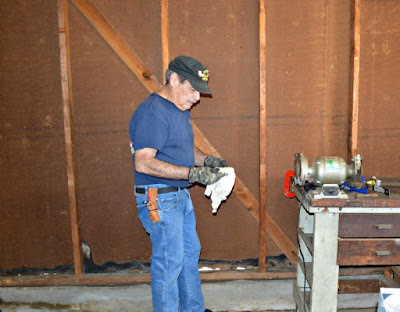 I helped hubby move a few heavy things in the garage and that's where our day started taking a turn for the not so great.  You'll notice behind hubby what appears to be daylight near the floor. 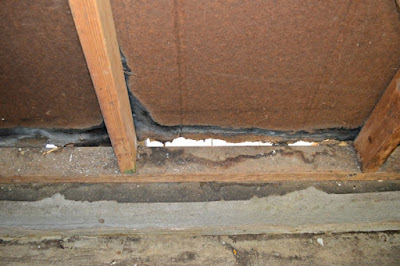 Well, it not only appears to be daylight, but IS daylight.  The siding is rotting away and in about 40% of the areas not even attached to the studs so we're looking at some serious reinforcing and rebuild in these areas. 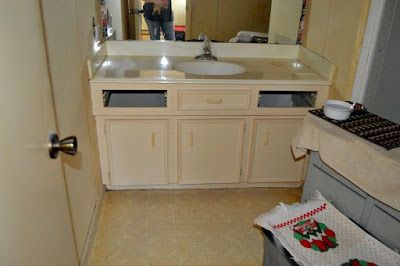 After helping hubby and feeling so good about so much trash being gone, I decided it was time to tackle the master bath vanity in preparation of getting the new vanity.  The water was turned off due to a leak in this bathroom quite some time ago.  What I was afraid of is what came to light - mold.  We will need to tear out every wall, find the leak, change out the plumbing and build from the ground up so to speak. 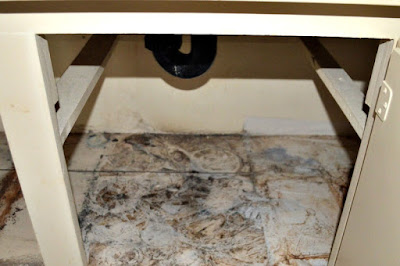 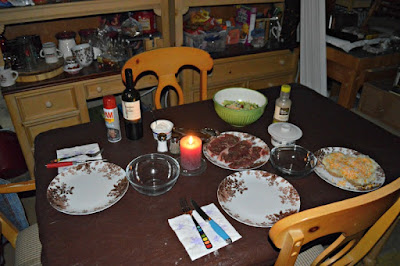 So we decided we needed a quite "special" meal and since we still don't have a kitchen we broke out the BBQ! We added a baked potato and salad and it was perfect!