This week's work hasn't gone quite as planned.  The foundation work was set to begin on Monday and be done by Wednesday.

Monday began fairly well.  The crew showed up and began digging while Raul came inside to show us where they would be jack hammering.  The original estimate included them moving whatever was in the way, but we felt that if we helped it would save a bit of time.  Since we just moved in everything is still in boxes so moving things around was pretty easy.  We were also told that they would spend an hour making plastic drapes to protect our things from the concrete dust.  The promise was that we would never even know they had been here when they were done.

On Tuesday we had a HUGE storm with tons of rain and the crew was called off because of the weather so we were anxious for them to show up on Wednesday and begin the inside work.

Wednesday comes and Raul tells us the plans are that they will be doing more (9) inside holes instead of the (5) holes he told us on Monday.  More holes that forced us to kennel (not in the original plan or the original budget since they now had to have regional shots not necessary otherwise at their age at a large cost) our dogs because of the additional locations. 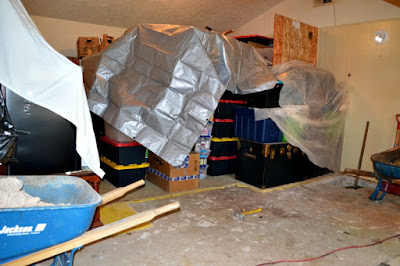 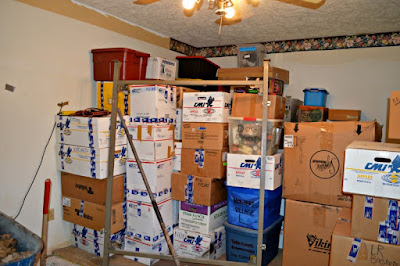 While we were gone kenneling the dogs the crew began the inside work.  When we got home we found that they had been jack hammering for 2 hours and NEVER bothered with the plastic drapes.  The tarp and sheet you see here we put up over more sensitive items.  When I asked Raul about it, he said they'd just taken it down! I DO NOT like bold faced liars! After a bit of discussion he did go buy the plastic that was supposed to already be in place, but I already had a 1/2 inch layer of concrete dust EVERYWHERE!  I will be rewashing clothes and linens I just washed for days and days! 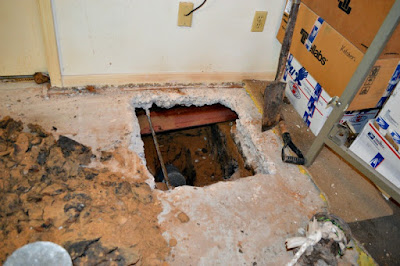 To top off a long week, they managed to break the water main AND the washer drain too. 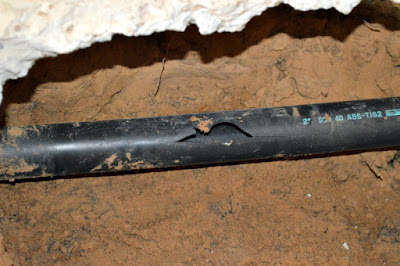 While this is a fixer upper, it IS our home and we DO NOT appreciate being disrespected by workers being paid to do a job, but acting as if our home and things are disposable.