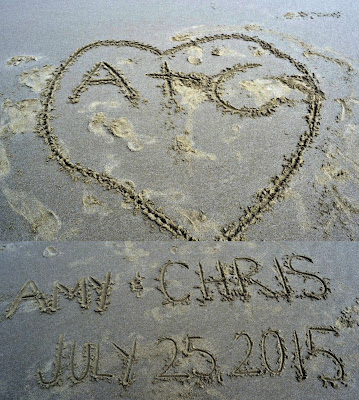 My brother got married a year ago and it was a destination wedding to a very special place that means a lot to him and my new SIL, Amy. We had family coming in from ALL over the country for both of them and being a Virgo, list maker and compulsive planner I started asking questions early on.  Since we were the closest to the location I felt responsible for helping in ANY way I could - from decorations, the cake, picking people up from the airport, etc...

My first stop was the Heceta Head Lighthouse Bed & Breakfast webpage.  One of the first things that struck me was that they need a better webmaster, but then it was pointed out to me that because they are a lighthouse on the coast, they get the business either way, but I still believe there should be better information and facility pictures for when your are spending an arm and a leg for the weekend. So, one of my goals of this post is to add some decent pictures here as well as Pinterest for those who feel they need more information before spending $315 + tax a night just for a room.

This was a "later in life" (they are both in their 40's) first wedding for each of them and they were keeping it small so I really wanted it to be perfect for them.  Just trying to pick out a date turned into a HUGE fiasco.  The web page shows dates blacked out so they were trying to work around that to pick dates that would coincide with their available days off from work and coordinating family flights etc...  LONG STORY SHORT the blacked out dates ARE available for weddings and large parties, but have to be booked through the general manager, but since the general manager was SUPER SLOW to return ALL calls and emails, it took FOREVER to start planning this wedding.  The webpage has a link to wedding packages, but they are not clear or thorough.  You have to contact owner to even know what the wedding packages are.

The webpage also does NOT have decent pictures of the facilities. If you have never been there you are left to fill in the blanks with your imagination. And with the pricey dollar amount on the weekend people kinda want to see what they are getting for the money. While we were there for their wedding people were stopping by trying to locate the owner/manager about their own weddings since their calls were not being answered.

The following quote is directly from their webpage: "Having just a few guests at your wedding, let us take care of your wedding plans! You set the date, pick a package and relax." Which as I can tell you IS NOT the case.

I grew up in an era of customer service and the customer is always right.   While that may not always really be the case I still believe business should be conducted a certain way - COURTEOUSLY.  Even if you are busy and have more business than you need you SHOULD ALWAYS return calls and emails.  The practice is akin to not burning bridges to me.  The customer you turn away today by not answering will not be there tomorrow nor will anyone they tell about their poor experience. Unfortunately, EVERYTHING became last minute in the 5-7 days before the wedding because of this.

To top off the management issues they were having EXTREME water problems.  When we arrived we found this note on the refrigerator. No phone calls before to tell us to bring bottled water, no one there to pave the way with explanations, just this note. 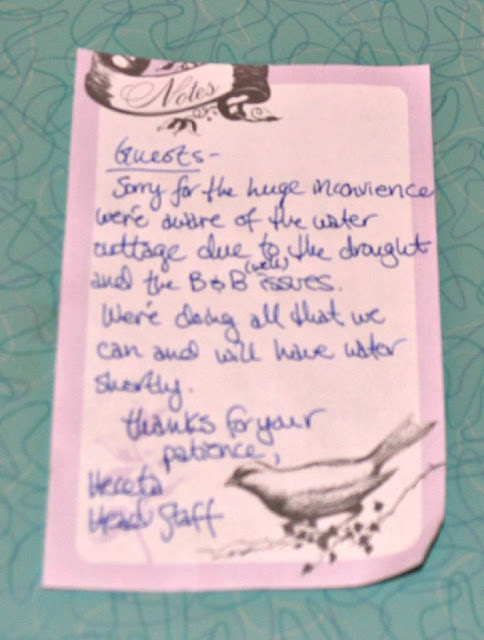 On our first night there we found we had NO water as we went to bed.  This meant NO flushing toilets, taking showers or brushing teeth unless you had a bottle of water laying around. They began trucking water in around 130AM right past our window! So that also meant very little sleep also. No one told us in advance that water was being trucked in to fill the tank periodically. No one told us that the tank had MAJOR leaks in it also and the water would continue to seep out on top of it. Apparently their water source had been cut off by a coast road crew repairing the road.

I have to tell you though none of that mattered to me when the water abruptly stopped as I was in the shower with a head full of lather the next morning.  NOPE, I was EXTREMELY pissed off. 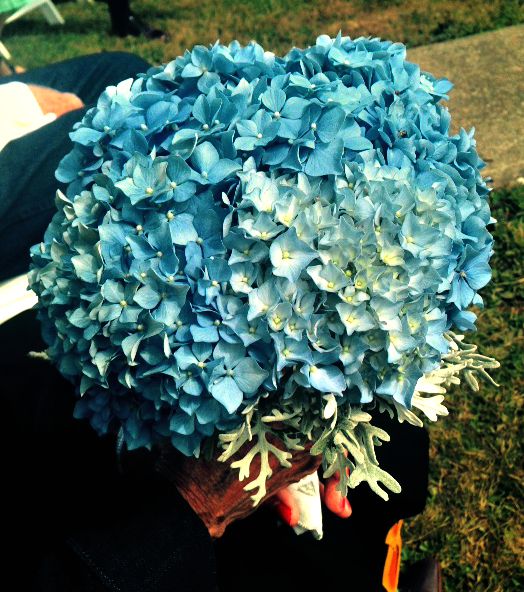 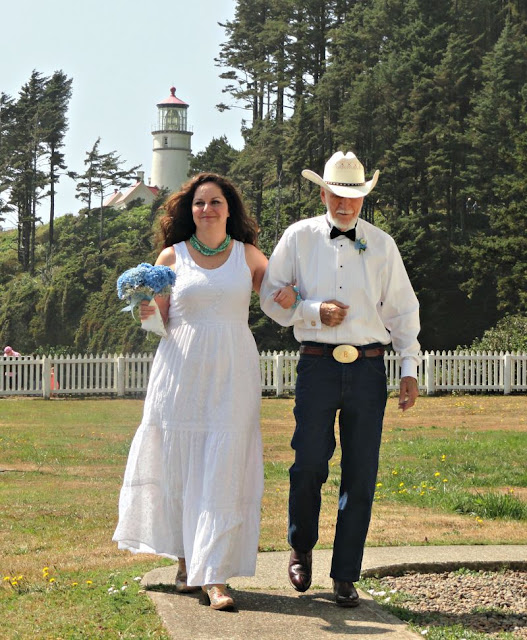 Amy and her father walking down the aisle. 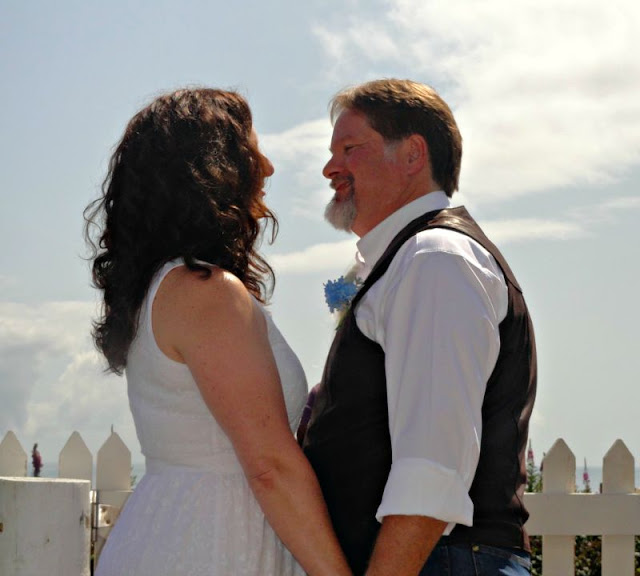 Chris and Amy taking their vows. 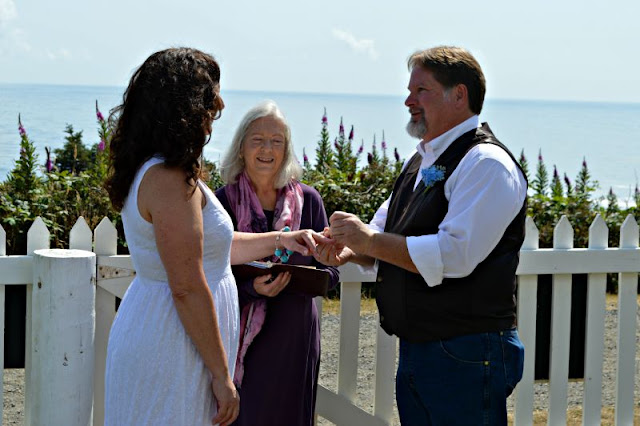 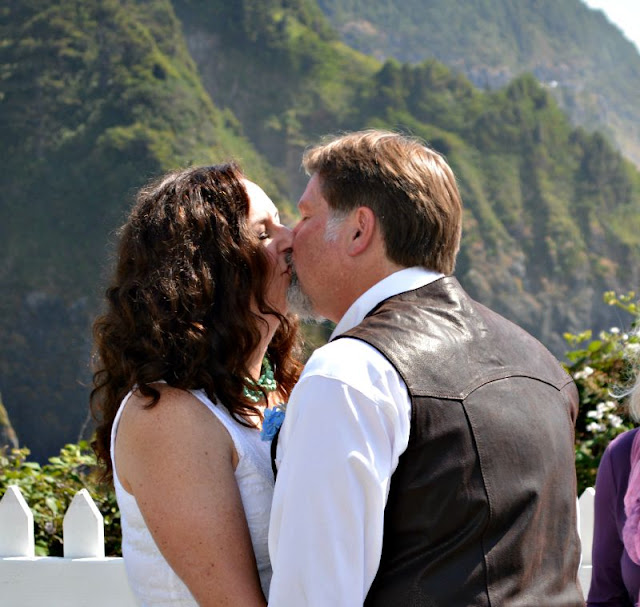 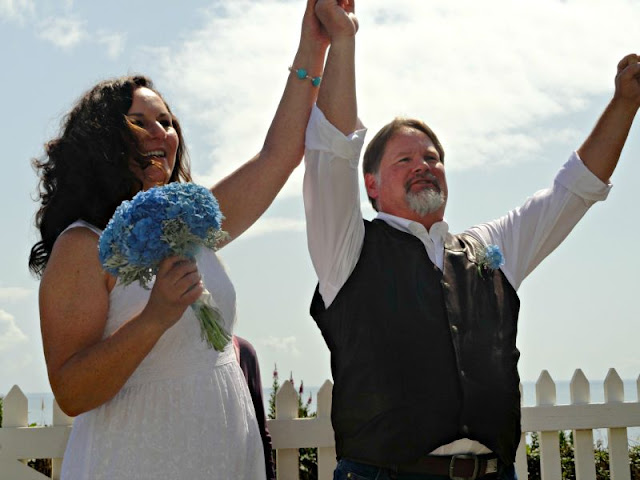 YAY! They did it! 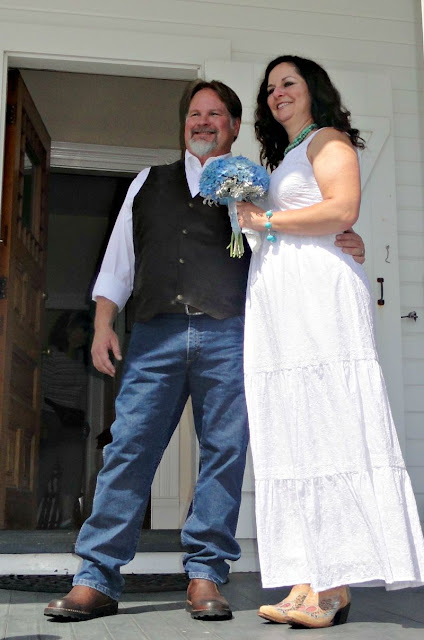 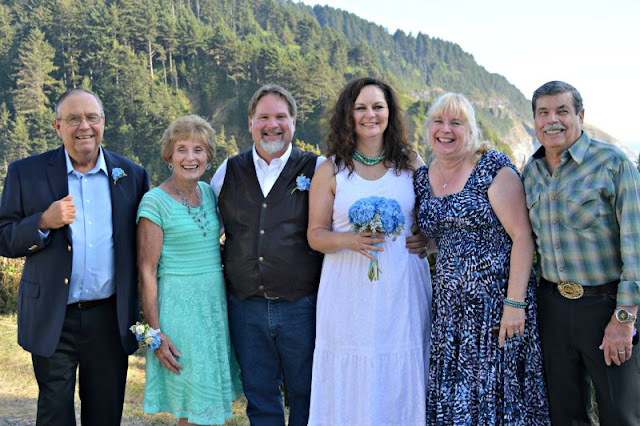 Chris and Amy with his family (stepdad Glenn, mom, Chris, Amy, me and hubby) 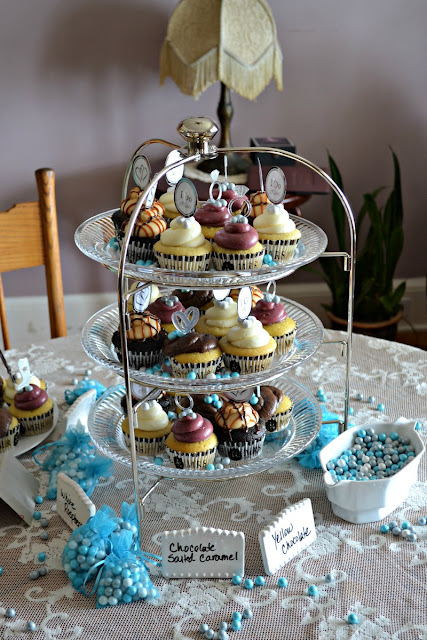 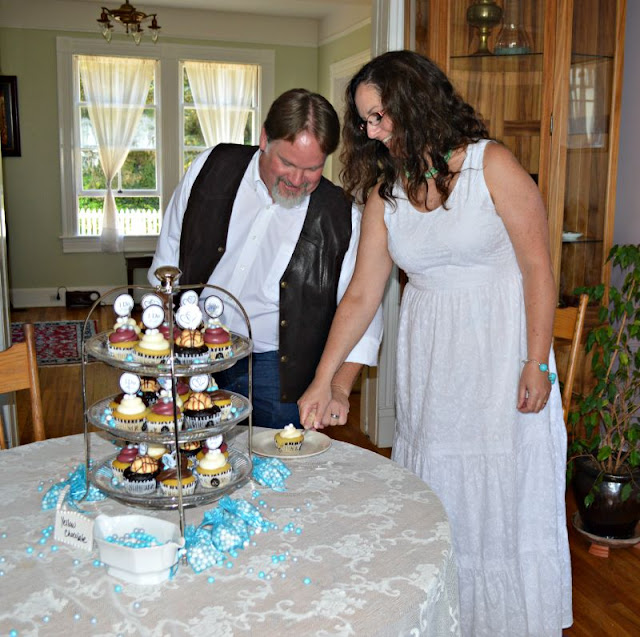 Chris and Amy weren't decided on a cake type so I offered to have my girlfriend, Heather (a gourmet cupcake baker) provide an assortment of their choice and they were a HUGE hit.  Everyone loved being able to try all the different flavors. They even did the ceremonious cutting of the "cupcake". 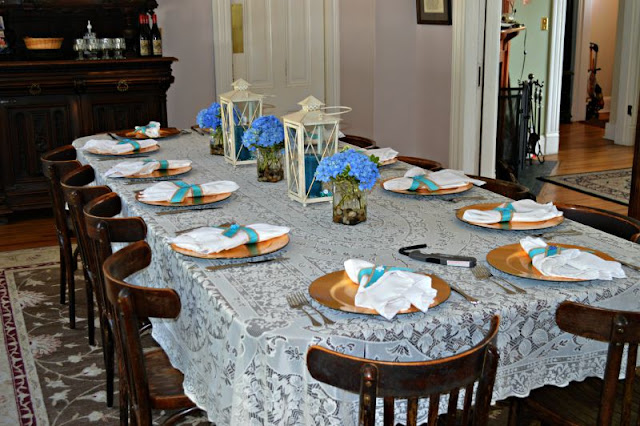 Chris and Amy chose a wonderful sit down dinner from a local caterer that tasted fantastic! They also chose the candles and lanterns that I was able to pick up locally and I made the napkin rings. 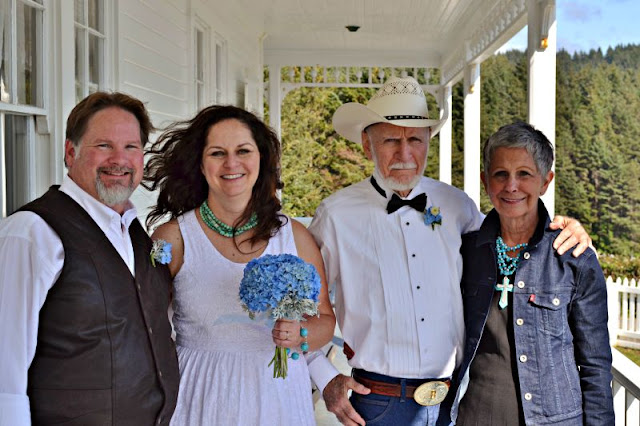 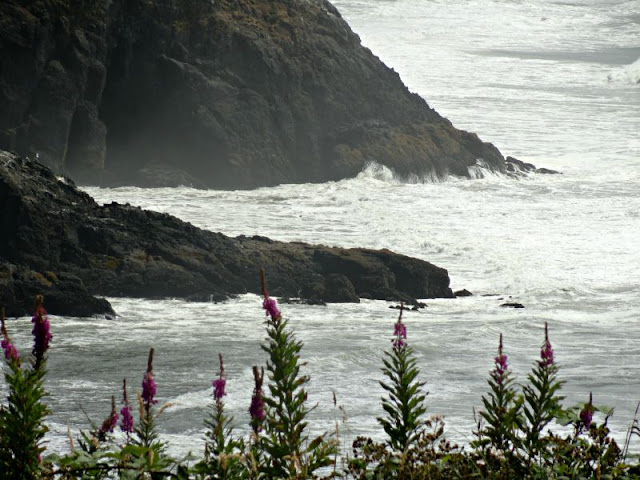 The setting was as peaceful and perfect and idyllic as was possible. 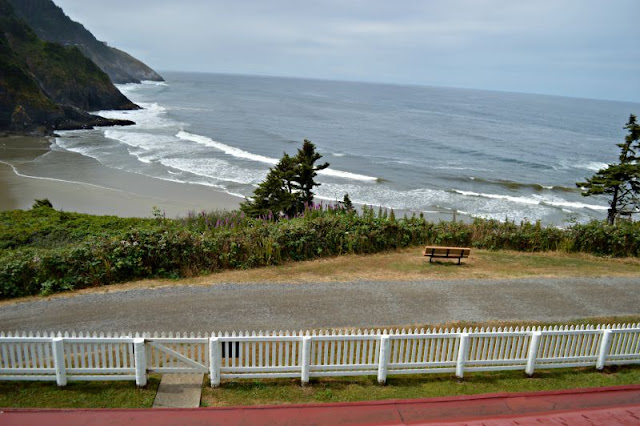 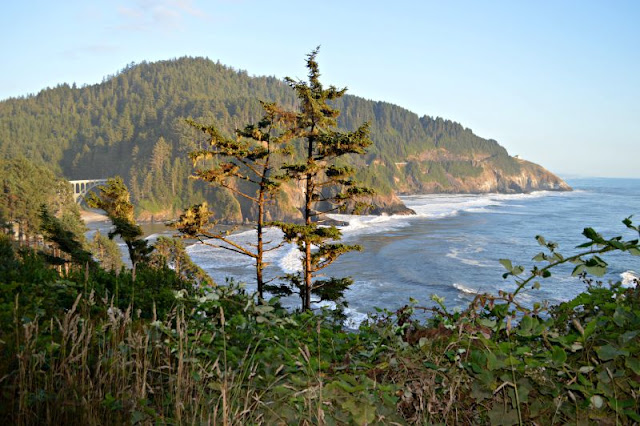 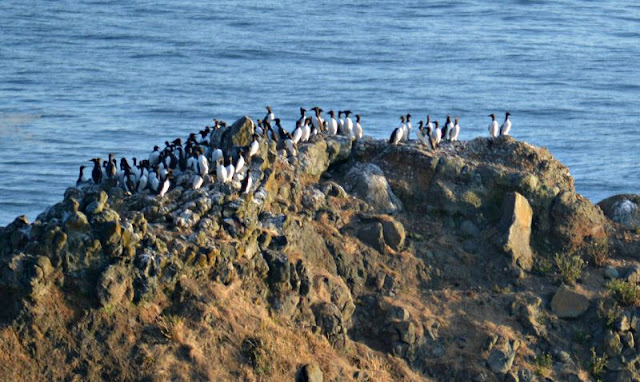 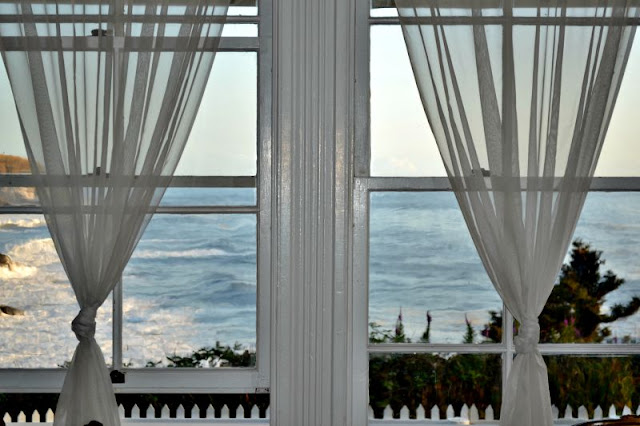 This was the view from our room! 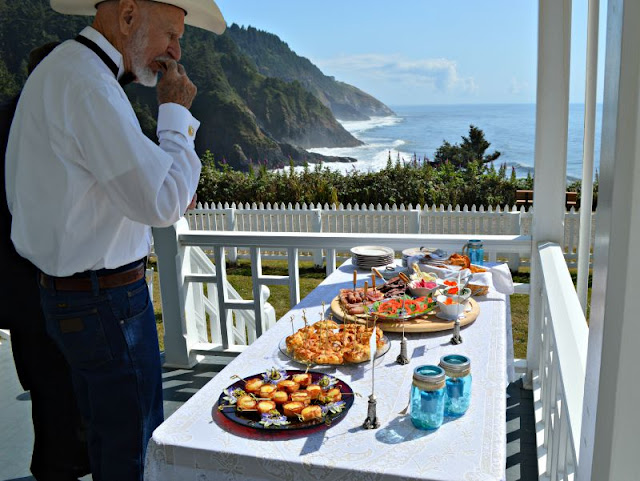 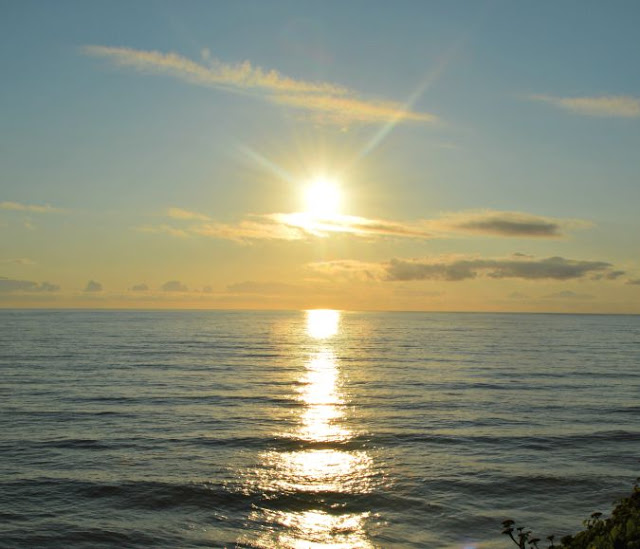 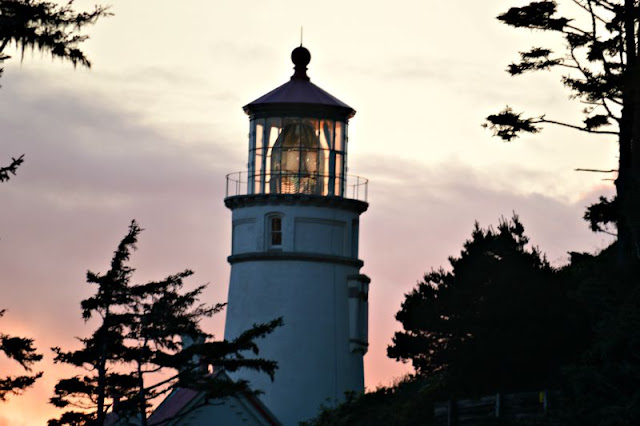 ALL in ALL we had a great time DESPITE the poor management and water problems which says more about our abilities to roll with the punches than the Inn's ability to problem solve.  To this date the owner/manager has YET to call me back despite my many calls to him and I'm sure since he has my money he never will.