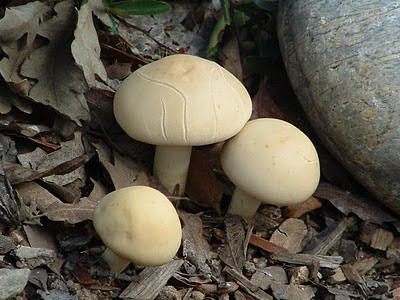 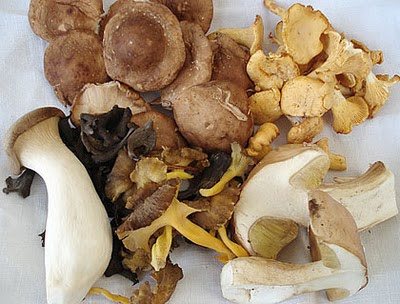 Wikipedia History on Mushrooms
Source 1 Source 2 Source3
Awesome Mushroom Recipes
Mushroom Ragout
Mushrooms and Immunity
In cold and flu season, it is important to eat a balanced diet, including foods that can naturally maintain the immune system. While the science on mushrooms and immunity continues to evolve, we already know mushrooms offer a variety of nutrients associated with immunity. Popular mushroom varieties are a rich source of selenium, a mineral that works as an antioxidant critical for the immune system; and also have ergothioneine, an antioxidant that may help protect the body’s cells.

Mushrooms are low in calories, have no cholesterol and are virtually free of fat and sodium. Mushrooms also contain other essential minerals like Selenium, which works with Vitamin E to produce antioxidants that neutralize "free radicals" which can cause cell damage. Studies have suggested that selenium may reduce the risk of cancer, cardiovascular disease, may slow the progress of HIV disease and may aid in symptoms of rheumatoid arthritis, pancreatitis and asthma. Studies show men who eat selenium rich foods may lower their risk of prostate cancer.

Potassium (good for the heart) is also found in mushrooms. It has been suggested a diet with potassium may help to reduce the risk of high blood pressure and stroke. Copper is another essential mineral found in mushrooms. Copper aids iron (also found in mushrooms) in making red blood cells and delivers oxygen to the body. Mushrooms also contain three B-complex vitamins; riboflavin for healthy skin and vision, niacin aids the digestive and nervous systems, and pantothenic acid helps with the nervous system and hormone production. These vitamins are found in every cell and help to release energy from fat, protein and carbohydrates in food. Vegetarians should know that mushrooms are one of the best sources of niacin. The vitamin content of mushrooms is actually similar to the vitamin content found in meat.

Early Greeks and Romans are thought to be among the first cultivators of mushrooms, using them in a wide array of dishes. Today there are literally thousands of varieties of this fleshy fungus. Sizes and shapes vary tremendously and colors can range from white to black with a full gamut of colors in between.

The cap's texture can be smooth, pitted, honeycombed or ruffled and flavors range from bland to rich, nutty and earthy. The cultivated mushroom is what's commonly found in most U.S. Supermarkets today. However, those that more readily excite the palate are the more exotic wild mushrooms such as cepe, chanterelle, enoki, morel, puffball, shiitake and wood ear.

Because so many wild mushrooms are poisonous, it's vitally important to know which species are edible and which are not. Extreme caution should be taken when picking them yourself.

Alternatively, store mushrooms unwashed and covered with a damp paper towel, then place inside a brown paper bag.

Mushrooms should never be soaked because they absorb water and will become mushy. Trim the stem ends and prepare according to directions.

Mushrooms are available all year round. They are best November through March. Caps should be closed around the stems. Avoid black or brown gills as this is a sign of old age. The tops are more tender than the stems. Refrigerate after purchase and use as soon as possible.

Never immerse mushrooms in a pan of cold water when cleaning, since they will absorb too much water. This will also make it more difficult to cook them, without losing flavor.
Mushrooms contain the same flavor enhancing substance found in MSG, glutamic acid.
Mushrooms are 90 percent water and do contain some natural toxins. It is best not to eat too many raw ones; cooking tends to kill the toxins.

There are 38,000 varieties of mushrooms, some edible, some very poisonous.

Truffles grow underground, are an oak or hazel tree fungus and are found by pig or dog sniffing truffellors. There are two types, black and white. They have a distinctive taste and are prized by many chefs in France and Italy. They are very expensive.

A chemical compound extracted from shiitake mushrooms has been approved as an anticancer drug in Japan after it was proven to repress cancer cells in laboratory studies.
To keep mushrooms white and firm when sauteing them, add a teaspoon of lemon juice to each quarter pound of butter.

If you are not sure of the safety of a mushroom, do not eat it regardless of the following test. However, the experts use the method of sprinkling salt on the spongy part, or the gills. If they turn yellow, they are poisonous, if they turn black they are safe.

Fact: The first mushrooms were thought to be cultivated in Southeast Asia, but it is not known why for sure. It is possible that someone discovered that mushrooms grew by accident or perhaps there was a demand and someone sought out a growing method.*

Fact: Whether mushrooms are wild or cultivated they continue to grow after they are picked. People sometimes mistake a thin white material called mycelium for mold, but rest assured it probably is the mycelium growing!

Fact: French farmers grew garden beds in the 1700's which ended up being too small and too expensive. They later moved their crops to caves created when the stone for building Paris was quarried - this is where the name champignon de Paris originated. American farmers followed the same method.*

Fact: While mushrooms are canned, pickled and frozen, drying mushrooms is the oldest and most commonly used way to preserve mushrooms.

Fact: Mushroom compost can range from being manure or wood based (sawdust, wood chips) to utilizing materials like cocoa bean or cotton seed hulls, brewers grains , even exotic items like banana leaves as substrate.

Fact: One Portabella mushroom generally has more potassium than a banana.

Fact: Mushrooms continue to gain popularity, especially the specialty mushrooms such as Portabella, wild Morels, Oysters and Shiitake. Mushrooms, particularly the Portbella are often used in place of meat in many dishes.

Fact: Wild mushrooms can range in price for reasons such as taste, historical significance and availability. European truffles can sell for over $1,600 per pound!

Fact: Wild mushrooms can be found in many wooded areas. If you do choose to harvest wild mushrooms, make certain you have a professional identify your pick. Many mushrooms may resemble safe mushrooms (they are called false mushrooms) and can be poisonous.