While researching black eyed peas (not an easy thing to do with a band by the same name) I ran across a reference to Texas Caviar. I read and read all those recipes and found the 2 consistent ingredients are black eyed peas and Italian dressing. So I started with those ingredients and from there added the ingredients I like most. We loved the results. We ate it for New Year's day with fresh tortilla chips, prime rib and twice baked potatoes. Eating black-eyed peas on New Year's Day is thought to bring prosperity. See what you think. I also found it ironic, at least in my case that since my family is from and for the majority in Texas that I had never heard of this before. 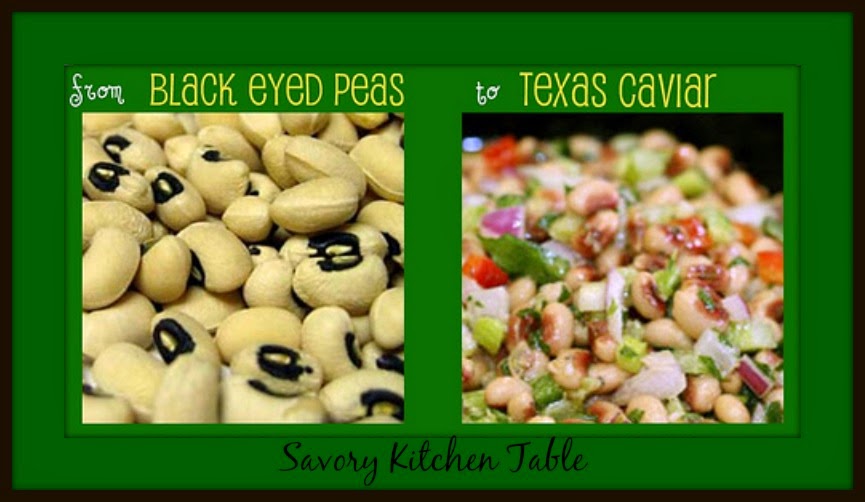 TEXAS CAVIAR
1 pound black eyed peas
2 cups Italian salad dressing
1 cup grape tomatoes, quartered
1 large shallot, chopped
1 bunch finely chopped green onions (tops too)
finely chopped jalapeno peppers to taste
3 cloves finely chopped garlic
Salt & hot pepper sauce to taste (I used Frank's red pepper sauce)
Tortilla chips
Originally native to India, but widely grown in many countries in Asia, the black-eyed pea was introduced into the West Indies and from there to the Southern United States as early as the 1600s in Virginia. Most of the black-eye pea cultivation in the region, however, took firmer hold in Florida and the Carolinas during the 1700s, reaching Virginia in full force following the American Revolution. The crop would also eventually prove popular in Texas. Throughout the South, the black-eyed pea is still a widely used ingredient in soul food and various types of Southern U.S. cuisine. The planting of crops of black-eyed peas was promoted by George Washington Carver because, as a legume, it adds nitrogen to the soil and has high nutritional value. Black-eyed peas are an excellent source of calcium. Isn't Wikipedia wonderful? I learn something every day!
Posted by threesidesofcrazy at 6/18/2014 11:23:00 PM

Email ThisBlogThis!Share to TwitterShare to FacebookShare to Pinterest
Labels: RECIPES-APPETIZERS