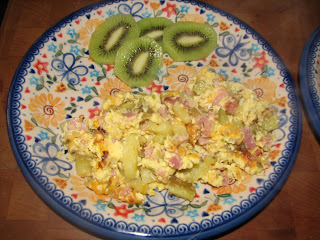 This is another one of those recipes that has floated around for so long that I have no idea what I tore it out of. The paper has yellowed, the edges look like they have been gnawed on, but the flavor is the same!

*Using an electric stove, I switch burners and start with a cooler burner at this point since cast iron does not cool down as quickly. I like the cast iron though for the nice crisp edge to the potatoes.
Posted by threesidesofcrazy at 5/26/2014 05:19:00 PM

Email ThisBlogThis!Share to TwitterShare to FacebookShare to Pinterest
Labels: RECIPES-BRUNCH